The official title of All Saints Church is ‘All Saints Challoch with Saint Ninian’s Fellowship’. Our thanks to the Revd. Canon Nigel Newton for supplying the following:

When Bishop Fredrick Goldie occupied the See of the United Diocese of Glasgow and Galloway between1974 – 1980 during that time Revd Canon David M Main was the Rector of All Saints Challoch and St. Andrew’s Chapel of Ease Newton Stewart a suggestion was made to use a venue in the south of The Charge for the celebration of the Holy Communion.

Canon Main had for some time conducted Holy Communion Services in Kirkmabreck Church [Church of Scotland – Creetown]; Bishop Goldie suggested that as members of All Saint’s/St. Andrew’s congregations were travelling from the South Machars to north for worship (Weekdays and/or Sundays) therefore Canon Main should seek to hold Communion Services in Whithorn. By negotiation with the then Whithorn Church of Scotland minister, it was agreed that this could be achieved; the Church of Scotland had purchased a building for their church hall, which was the building given up Free Church of Scotland so the first Scottish Episcopal Church Holy Communion Service was held on the First Sunday in Lent at 6 p.m. on 6th March 1977; for the ensuing months the Service was held on the first and third Sundays in the month for the next eighteen months until the Rector and the All Saints’ congregation decided that a monthly service would be sufficient. This Service carried on the Church Hall until the Sunday after The Ascension, 15th April 1988, by successive Rectors before moving into the Church of Scotland Priory Church where the Communion has been celebrated and/or administered each first Sunday afternoon in the month ever since.

Many members of the congregations past and present have played their part in the life, work, ministry and mission of The Whithorn Fellowship which has no addendum constitution to that of All Saint’s Challoch, but like other venues which Scottish Episcopal Church Bishop’s and Rectors have used in the past to celebrate the Holy Communion within the confines of The Charge, it has been ‘understood’ by successive Vestries (and The Diocese of Glasgow and Galloway) that the Whithorn Fellowship is an inherent part of the of a ministerial commitment known as the Charge of All Saint’s Challoch with St. Ninian’s Fellowship. 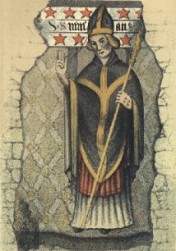 This site uses Akismet to reduce spam. Learn how your comment data is processed.

Diocese of Glasgow and Galloway